Okay, let’s just all agree to agree on this. We all need medical care during our lifetimes. And, maybe we can agree on this too. Healthcare/medical care is pretty expensive. Expensive compared to the average person’s wage at least.

Maybe some disagree with one of the two above statements, but generally I think we can agree. The key is how to pay for our individual healthcare. Or maybe, the key is how to try to encourage our society to come to some sort of agreement on how to pay for the healthcare of those that don’t have the means to pay for it themselves. I’m not sure what the real issue is. All I know is that we, as a country, are wealthy enough that we “deserve”, and should demand, healthcare for all our citizens.

I’ve been thinking about this since I did rotator cuff surgery in February. Actually, since I tore up my shoulder at Cyclocross Nationals in Madison in January. Participating in the system, as many of you already might know, is a challenge. It is so unbelievable broken that even those working in the field don’t understand how the system works. I’m not sure anyone does.

Yesterday out riding, we had a problem. My friend, Ian, crashed and hit his face pretty hard. He has a history of seizures, but none of us saw him go down. We came back and he was laying on the edge of a gravel road, pretty much unconscious, blood pouring down his face and out of his nose. Little Jack, was already on the phone with 911, trying to explain to them where exactly we were. Bill was holding Ian’s head, trying to keep him still. I called Ian’s wife, Katlin, to see if she could give me some information on his condition. She got into her car and started driving out to where we were immediately.

Long story short, the ambulance arrived, they put Ian inside to get him out of the cold. Ian “came back” after about 15 minutes in the back of the ambulance. He had health insurance, he works at Rebound Physical Therapy, where I did PT on my shoulder, but it was going to cost him a “fortune” to take an ambulance ride to the hospital and do all the necessary tests. Something maybe like 2 to 4 months salary, depending on what they did to him once he showed up. He decided to deny care and get a ride with his wife. The ambulance guys said since Ian was aware, he could decline treatment. I wasn’t so good with the decision at the time. Ian ended up going to minor-med and getting his face stitched up. He decided to take the risk on the concussion and broken nose.

I was talking to Bill while riding and wondering what he would have done. He told me pretty much exactly what Ian did. I think that it is so wrong that we have to make financial decisions that may, and many times do, risk our lives and health. I’m not sure what the answer is, but it needs to be fixed. I don’t understand why no one wants to address the cost issue. No one can ever tell me what it is going to cost to do any test before they actually do the test. CAT scans, MRI’s, tests that cost a few thousand dollars, they have no idea how much.

My brother broke his wrist falling off a ladder a couple months ago. He didn’t go to the hospital. I finally got him to go get it x-rayed and then sent them off to Stacie in Louisville. She said he needed a CAT scan of his wrist. I called around Topeka and no answers on cost. I eventually got some quotes of between $1800 and $2200. I went onto the internet and found a place from California that scheduled them all over the country. It cost $395. He drove the 60 miles and went to a regular imaging place and it was done. The charge less than 20% of the higher cost in Topeka. I don’t understand it.

Catherine had really great insurance when she crashed in Madison at Nationals and punctured her lung. But when all was said and done, she owed nearly $8000 out of pocket because they said she used an out of network hospital. I thought if it was an emergency, your insurance paid for any immediate medical care? Guess not.

We’ve already decided as a society that we take care of really hurt people. It is a law that hospitals can’t turn down patients that need immediate medical attention. When I come upon someone hurt or really sick, I want to be able to call the proper authorities, an ambulance and have the person taken to the hospital and taken care of. I really don’t care if the person was a drug dealer who was shot selling crack, an old lady that slipped on the ice or a police officer that had a heart attack. Or Ian, who crashed on his bike and hit his face onto the ground. I want them taken care of. We are a society of people. All of us don’t necessarily approve of what many of the others do or how they choose to live their lives, but that being said, it is the society that we choose to live in. No one is forcing anyone to live here, so we need to put aside the “I don’t want to pay for the other people’s insurance” argument.

Ian is in a very high risk group, as his wife, Katlin is. He has had seizures since he was a teenager and she was just diagnosed with Type 1 diabetes. They are both going to be turning 26 pretty soon, so have to buy their own insurance. Can you imagine how much that would be? Through no fault of their own, they are nearly uninsurable in today’s system. It’s bullshit. It’s wrong.

I heard a radio interview on NPR about a woman in Florida that was trying to get people down there to sign up for the Affordable Care Act, Obama Care. The NPR segment said that Florida was a state that would really benefit from the legislation. But they are having a hard time getting people to look at the information, let alone sign up. I heard interview after interview from people that said that it was horrible legislation and it was just going to cost everyone money, but then admitted that they no nothing about it, but were sure that it would not be any good for them, even thought they had no health insurance now.

Nearly everyone I talk to has some view about Obama Care. And I really haven’t met any one person that could tell me more than one or two things about it. I’ll be the first to admit that I know very little about it too. I know that you can get insurance without having to disclose pre-existing conditions, which is a very big deal. That would apply to my brother, whose wrist is still broken, Ian and Katlin. Other than that, I don’t know much.

I can’t tell you if the Affordable Health Act is going to be a great thing in the long run. I do know that our health care system is really screwed up currently and I’m willing to try just about anything different to see if it helps some. I wish we could all have a more open mind and put themselves into other people’s positions. When it comes down to it, our health is the most important part of life. If we are unhealthy, then the rest of life is an uphill battle.

Let all try to figure this out. At least keep an open mind and recognize that we have a big problem that needs to be addressed. This might not, and most likely won’t fix the whole problem, but in my opinion, something is better than nothing. If you want to check out the Affordable Care Act and it’s offerings, click here. If this post just gets one uninsured person to go out and explore the options of getting insurance, then it was a success.

We had to wait here over 15 minutes before an ambulance arrived. We complained about how long it took, but really? We are very fortunate to live in a country that has such good emergency services.

Ian taking a rest until Katlin showed up.

Katlin showed up with some medicine.

Kansas aren’t so inclined to look into the ACA either. This headline of the Topeka paper says that only 1855 people have signed up for it so far. That is out of an estimated 363,000 people that don’t currently have health insurance now. That is about 0.5% of the unisured people here. Wow is all I can say.

August 30, 2013 Have you met Malik? Malik is a 23 year old bartender and server who works in the restaurant industry. He works on… 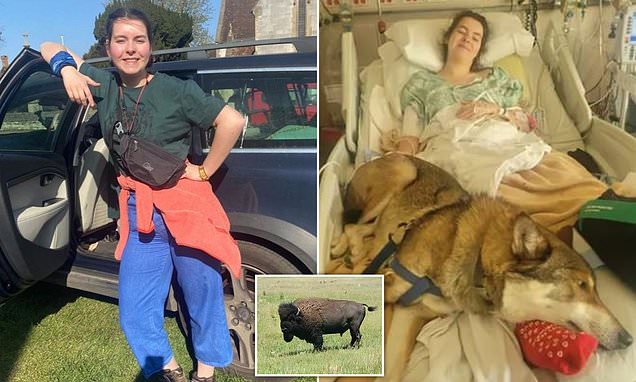 A British student who was paralysed after a 2,000lb bison gored her and tossed her 15ft in the air may be left stranded in the US…