This trend is driving up premiums. According to AM Best, an insurance industry ratings and analytics firm, the total amount of homeowners’ insurance premiums Americans paid rose by 8.4 percent between the third quarter of 2020 and the third quarter of last year. (An AM Best spokesman noted that this aggregate snapshot did not reflect what any individual policyholder paid.)

When a client is interested in a property, Mr. Diton said that he will lay out a spreadsheet and analyze the expenses. In some cases, prospective buyers decide against the purchase. “The homeowners’ insurance increase is definitely contributing to the issue for those people,” he said.

“Building materials themselves are lending them to more catastrophic losses,” said Jared Carillo, director of foundation accounts at SmithBrothers, an insurance brokerage in Connecticut. Materials used in construction today include more synthetics that burn faster and hotter, such as particleboard, spray foam and wire insulation, he said.

Open floor plans are another culprit, Mr. Carillo said: “A fire that starts in the kitchen is going to generate more loss across the first floor.”

Some of the weather changes being monitored by the insurance industry, such as the northerly drift of “Hurricane Alley,” are gradual shifts. Others — like the droughts that have exacerbated enormous wildfires in the Western United States — have hit an inflection point much more rapidly. Mr. Rauch said that in the 1980s, the average annual insured losses in the United States from wildfires ranged from $1 billion to $3 billion.

“This was the expectation going forward,” he said.

That changed in a heartbeat. “In 2017, for the first time, insured losses were somewhere in the $16 billion region,” Mr. Rauch said. “It was a massive jump, and 2018 was basically the same.” After a moderate Western fire season in 2019, 2020 brought another round of eye-watering losses, roughly in the neighborhood of $11 billion.

It is evidence that even the nimblest of companies can be caught by surprise at how fast conditions can change. In just the last four to five years, Mr. Rauch said, wildfires have brought significant changes. “The loss situation was totally different from the decades before,” he said.

Insurance and real estate professionals say this is especially problematic for people who put roots down decades ago with the expectation of growing old in those homes and neighborhoods, only to find that the ground beneath their feet has shifted.

“I do have people that retired here,” said Patrick Brownfield, personal risk adviser for the insurance broker Hub International in Jackson, Wyo. “They’ve had astronomical increases in their insurance in the last two years,” he said, adding that this leaves those homeowners with few options. “It’s going to cost them $20,000 a year on their fixed income, and now they can’t pay the insurance because all their equity is in their home,” Mr. Brownfield said. 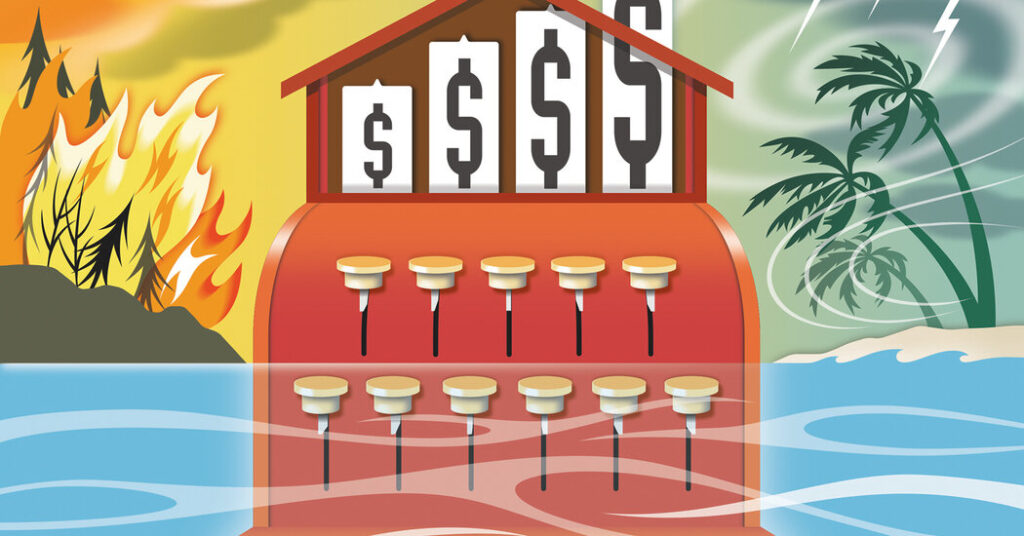 This trend is driving up premiums. According to AM Best, an insurance industry ratings and analytics firm, the total amount of homeowners’ insurance premiums Americans…

Homeowners in the US got new guidance to help them defend against increasingly frequent wildfires and associated rising insurance premiums. The Insurance Institute for Business…