California is set to become the first state to offer government-funded health insurance to low-income undocumented immigrants ages 50 and above — the latest historic expansion of safety net supports for Golden State residents no matter their citizenship status.

Governor Gavin Newsom recently unveiled this year’s $263 billion state budget, which expands social services for undocumented Californians. The state is paying for the equity-boosting measures with a surplus of tax dollars from the state’s richest residents and federal aid meant to help states recover from the COVID-19 pandemic.

“Regardless of your immigration status, we have your back,” Newsom said last week while announcing the budget.

Join our email list to get the stories that mainstream news is overlooking.
Sign up for Capital & Main’s newsletter.

California will expand $600 stimulus payments started in February to include taxpayers who make up to $75,000 annually, whether they are U.S. citizens or not. An extra $500 will also be available for families, including mixed-status households. The state is also planning another first: creating a permanent food assistance program for low-income undocumented residents. By 2023, CalFresh will be open to everyone.

The state will also give grants to immigrant entrepreneurs and cash assistance to elderly or disabled immigrants excluded from federal aid.

With California continuing to lead the nation in its inclusion of immigrants, Capital & Main spoke to immigrant rights advocate Cynthia Buiza to understand how we got here and what comes next.

Note: This interview has been edited for length and clarity.

Capital & Main: Why is California including undocumented immigrants in its expansion of social services?

Cynthia Buiza: Historically, many immigrants, especially undocumented immigrants, have been excluded from most social safety net programs. Even after the anti-immigrant Proposition 187 was defeated in 1997, we still had a long way to go to ensure that immigrants are not left out of programs that could help them become more healthy, thriving residents of our state.

Overall it’s prudent policy to have a more expansive safety net that allows for people who live in our state, who are contributing to our economy, to also benefit.

Really, it’s an equity issue. California is home to 2.3 million undocumented immigrants. They make up 6% of our state’s population and nearly one in 10 of our workers. So they make significant contributions to the workforce and generate about $63 billion in government revenues.

“California is home to 2.3 million undocumented immigrants. They make significant contributions to the workforce and generate about $63 billion in government revenues.”

For many years, hundreds of thousands of immigrants in California have not been able to access federal aid or state benefits.

We need to make a break from racist policies of the past. And that means understanding that this is not just about immigrants. This is about all of us. When all of us are able to have access to these opportunities and benefits — not just immigrants, not just black immigrants, but all of us — that’s really the big idea. And that’s going to take some work because right now the system is still pretty much stacked against the little guy. The people who have been in the lower rungs of our society and our economy, they’re still pretty much stuck there.

We are appreciative of how the state has thought about this, that you can’t exclude this big number of workers, working on the front lines, from getting the kind of economic and health relief that they need.

It is an important lifeline, especially for community members who often do not have savings. Many are always a paycheck away from personal bankruptcy, making these kinds of relief so crucial for them.

The new expansions will improve health and economic outcomes for a population that has historically not had access to health care. Many of them have not seen doctors for years. So there’s real human consequences.

We learned so much from the pandemic and four years of President Donald Trump. We learned that without building a strong, powerful, sustainable infrastructure to protect immigrants, they become so vulnerable.

The amount of suffering and pain that immigrant communities went through under the Trump administration and the pandemic — we don’t want that to happen anymore.

What can the federal government do to support states expanding immigrant rights?

Really, the big hope, one way or another, is that the Democrats can find a way to make good on the Joe Biden administration’s promises and enact immigration reform.

While we’re waiting for that, it doesn’t hurt for the federal government to support the kinds of expansion opportunities that California is offering to many undocumented immigrants.

“There’s a big argument for shrinking the state’s uninsured population. With coverage, people aren’t having to rush to emergency rooms to get health care, which is more expensive than preventative medicine.”

Other states are following suit. Illinois, Washington and Oregon have started expanding healthcare to undocumented immigrants in their states.

We hope that there’s some real complementary momentum. Movement at the federal level, and the states not giving up on initiatives to take care of their immigrant populations.

How does expanding health access for immigrants affect the state’s economy?

We have been telling our legislators and our partners in the governor’s office that it is actually smarter economically to invest in everyone’s health.

There’s a big argument for shrinking the state’s uninsured population, since undocumented immigrants are still the least likely to have insurance. With coverage, people aren’t having to rush to emergency rooms to get health care, which is more expensive than preventative medicine.

In California, where health care can be very expensive, it’s one of the drivers of bankruptcy. People actually lose their homes because they can’t afford their health care costs.

For many immigrant community members, expanded social services are a big lifeline, especially when inflation is going up and many people have lost their jobs. When people are healthier they can continue working.

We have made a lot of inroads in health outcomes overall for California because of these more expansive, humane and inclusive policies. This approach also appeals to a big segment of the California population. There’s widespread support for humane immigrant policies in our state.

Why has California become a national trailblazer in expanding government-funded health coverage to almost all residents regardless of immigration status?

For five years, we’ve had a campaign called Health4All. We’re trying to get as big of a population as possible covered by Medi-Cal, California’s Medicaid health care program. Year by year, we’ve negotiated for more.

In 2010, the Affordable Care Act was signed into law, expanding health care access for millions of Americans. But undocumented immigrants were excluded. This was one of the biggest gaps in our health care system.

The California state Legislature first introduced Health4All legislation in 2014. We were trying to negotiate for a broader package. What was feasible at the time, under then-Gov. Jerry Brown and a struggling state economy, was to provide Medi-Cal coverage for all income-eligible kids up to age 18 regardless of immigration status.

More than 250,000 children and counting have benefited.

“We’ve added medical coverage for income-eligible Californians ages 50 and above regardless of immigration status. We’re estimating 235,000 elders will benefit.”

But you can’t really stop there. There needs to be continuity of care. So we gathered widespread support in the California legislature to expand Medi-Cal to young adults ages 19 to 25. We passed it in 2019 under Gov. Gavin Newsom — making us the first state to extend government-funded coverage to undocumented adults.

California state Sen. María Elena Durazo and Assemblymember Joaquin Arambula negotiated with the governor’s office in 2020 to include undocumented seniors. But when the COVID-19 pandemic happened, that commitment was rescinded.

That’s how we got where we are now. We’ve added medical coverage for income-eligible Californians ages 50 and above regardless of immigration status. This will take effect on May 1, 2022. We’re estimating 235,000 elders will benefit.

We’re not done. There’s still ongoing negotiations right now in Sacramento. We have proposals, including Assembly Bill 4, to expand Medi-Cal to immigrants ages 26 to 49 who remain uninsured.

We want to change the “normal” that many immigrants have lived with for many years by creating a compassionate state that recognizes the contributions of immigrants and honors their needs, which are very similar to yours or mine.

How can we create a more inclusive California that breaks away from a lot of the cruel policies that have been initiated against immigrants in the past?

We can look at historical exclusions, and using a racial equity lens, we can address them once and for all. So that when we talk about shared prosperity, a California for all, we are talking about the people that live here and contribute to our state. 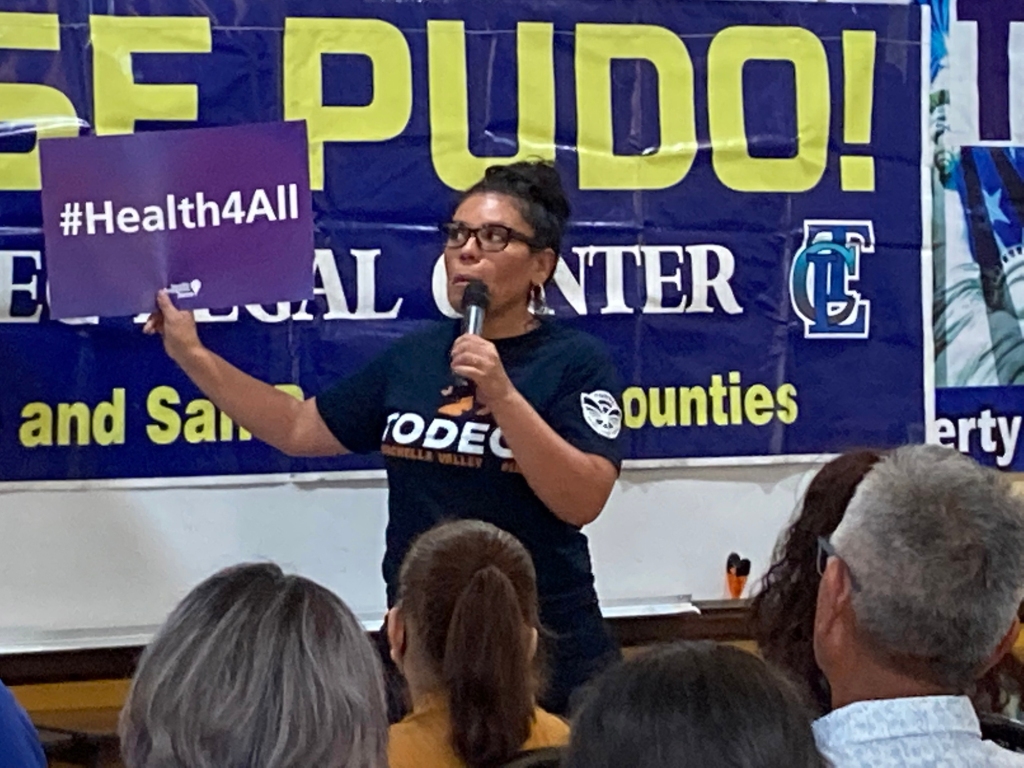 Addressing a packed room of fellow immigrants, Isabel Coronel recalled how as a retired farm worker, she never used to seek medical help because she… 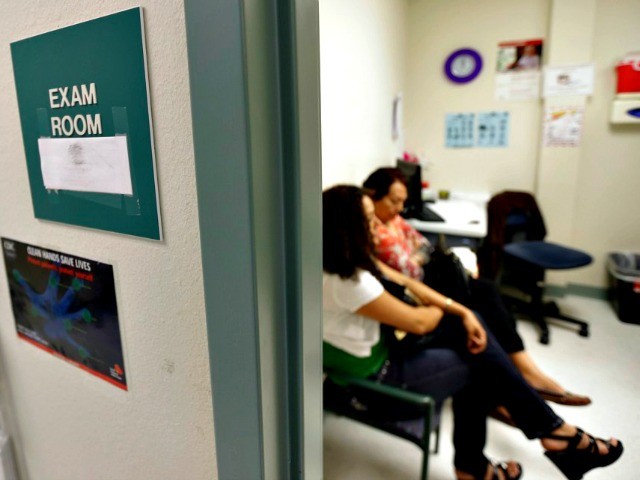